This patient is a female to male transgender patient who contacted Dr. Medalie of Cleveland Plastic Surgery in Cleveland, Ohio in regards to FtM “top surgery”. The patient desired a complete mastectomy with the goal of having a masculine chest that appeared as if he were genetically male. The various types of operations were explained to him and it was decided to proceed with a double incision approach with free nipple grafting and reconstruction . The surgery was performed as an outpatient at MetroHealth medical center, and the patient is shown nine months after the procedure with excellent contour and acceptable visibility of the scars. He has good nipple graft survival and placement. He is very happy with his “top surgery” and subsequent gender change. 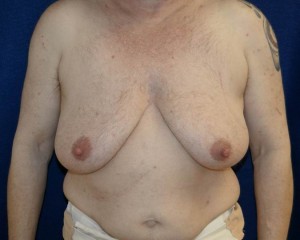